The Open Water Diver is a beginner’s diving license. The course takes 3 days and includes pool lessons and two boat trips with 4 open water dives. The training provides the necessary skills to become a responsible and safe diver. The Open Water Diver certificate enables divers to dive independently to a maximum depth of 18 meters.

MEET US AT THE DIVE CENTRE FOR COURSES

MEET US AT THE MARINA FOR TRY DIVING

WATER, TEA AND COFFEE IS INCLUDED

Please note that you are not allowed to fly after scuba diving for at least 18 hours.

Fit to dive?
We are asked this question quite often. Almost everyone is going to be fit to dive, but some medical conditions can cause problems underwater so it is important to make sure that you know if you are medically fit to dive. When you start a PADI Open Water Diver Course, you are required to complete a medical statement to declare yourself fit to dive. This statement lists medical conditions that may be affected by diving so be sure to answer completely and honestly – it’s for your own safety.

Previous experience in diving
No prior diving experience required. Please note that you will need to know how to swim for 200 meters and float/tread water for 10 minutes. This is mandatory to pass the Open Water Diver Course 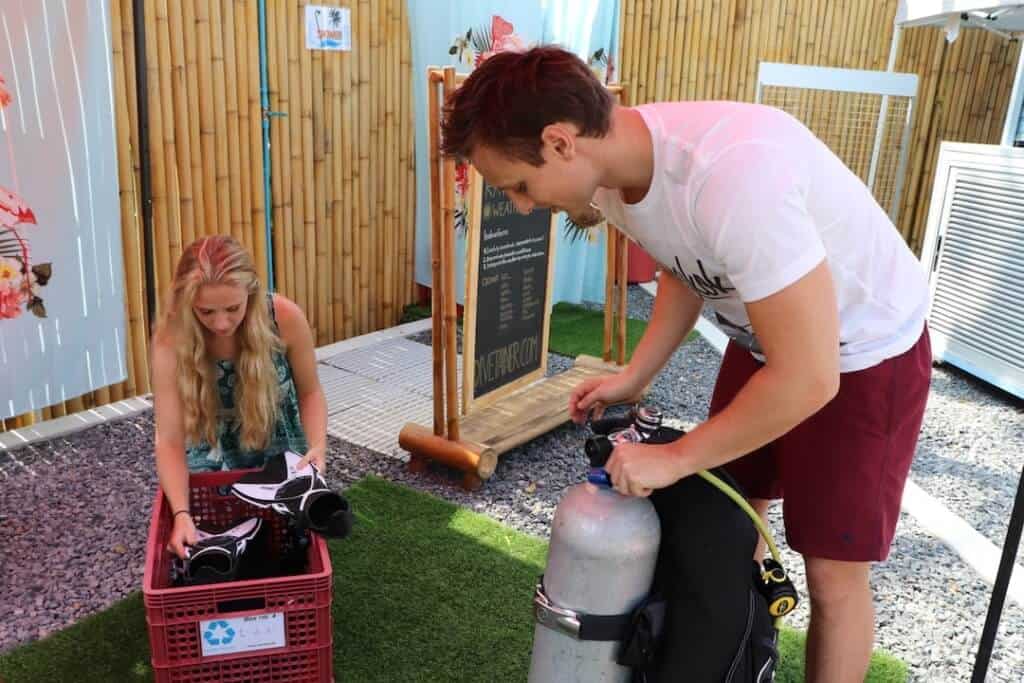 You can start your Open Water Diver Course theory with the PADI eLearning already at home.  The knowledge development portion of the course is designed so you can learn at your own pace and when it’s convenient for you. Complete the academics online. The theory exam can be done as well online.

Your instructor will go over the open questions from the PADI eLearning with you. 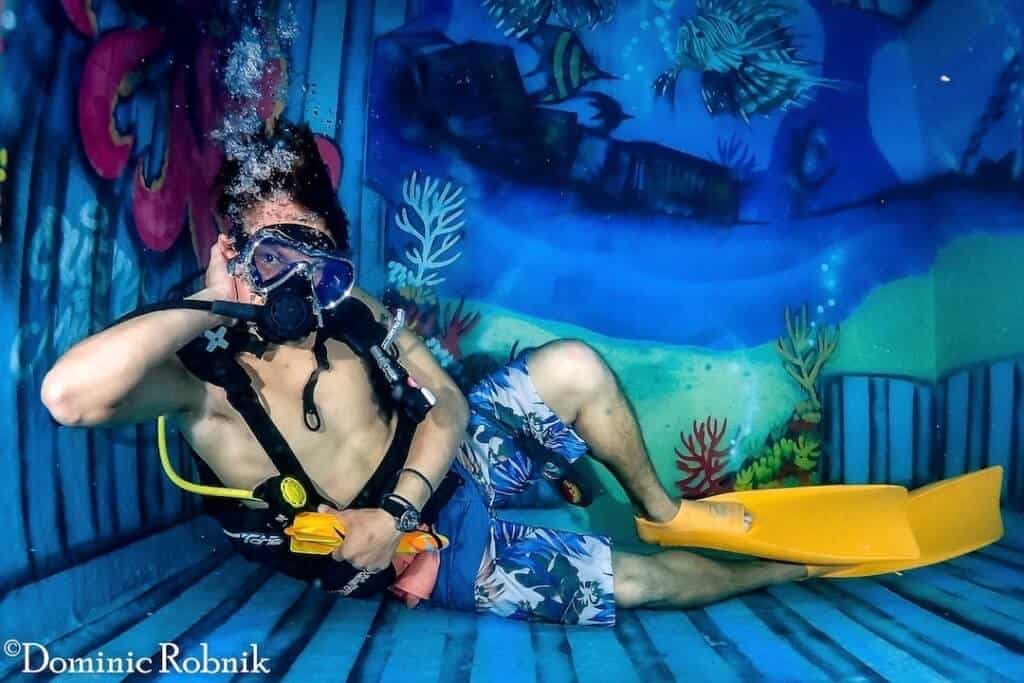 Swimming pool practical sessions can be taken in Phuket or Bangkok depending on your preference. Usually it takes one full day to develop and practice the 24 scuba skills in the swimming pool under direct instructor supervision. These Swimmingpool sessions can be done in to 2 – 3 evenings in Bangkok (5pm to 8:30pm). As you learn new skills, you’ll build the abilities and confidence needed for diving in open water. You will learn as well how to assemble and dissemble you scuba diving equipment. Get ready to experience everything you’ve learned with the freedom of open water. The second day of your Open Water Diver Course starts at 7:45 with the transfer to Chalong pier. On the boat you set up your equipment. After a briefing you do your first dive at a maximum depth of 12 meters. Between the two dives at selected Phuket dive sites you enjoy a delicious lunch and snacks. After the second dive we are back around 5 pm.
On the third day of the Open Water Diver Course in Phuket you will be diving to a maximum depth of 18 meters. You will be more relaxed then ever before and gain some experience. Together with your instructor, you will complete your scuba diving log book where you can track your diving experience around the world noting the fish you see and friends you will meet along the way.

As soon as your open water training dives are approved by your instructor you will be certified as a PADI Open Water Diver Diver, enabling you to embark on unforgettable adventures.

Once you get your PADI Open Water diving license in Phuket, you will be recognised world wide as a certified diver who can go on dive trips, rent equipment and conduct your own dives with a buddy up to a depth of 18 meters, anywhere in the world!

Congratulations for your first SCUBA dive certification. When you complete the Open Water Diver course and continue diving in Phuket with us you do not have to pay for rental scuba diving equipment during the same stay on Phuket Island.

Where do I dive during the Open Water Diver Course in Phuket?

There is an abundance of marine life at the dives sites located in the Andaman Sea around Phuket and your instructor will show you a diverse variety of fish, corals and marine creatures. As we have a flexible boat schedule we choose the dive sites in the morning of the Open Water Diver Course day depending on prevailing conditions such as weather, waves, tides and currents. Enjoy 2 dives each day with no time limit, on our diving boat. Dive sites suitable to complete the Open Water Diver Course in Phuket are the Racha Islands, Koh Mai Thon, Koh Doc Mai and Shark Point.

Which sunscreen is allowed in Thailand?

Which sunscreen is allowed in Thailand?

The use of sunscreen with oxybenzone, Octinoxate, 4MBC, and Butylparaben are banned in the country’s national parks as such chemicals are damaging corals every year, according to the order. According to academic studies, chemicals found in sunscreen have damaged coral embryos, obstruct the corals’ reproduction system and lead to coral bleaching. About 3,500 brands of sunscreen were discovered to contain at least one of the harmful chemicals, according to the studies citing by the Department of National Parks, Wildlife and Plant Conservation. Violators will be charged for violating section 20 of the National Park Act B.E. 2522 and can be fined up to 100,000 baht.

Tourists are strongly encouraged to use water-resistant sunscreen or sunscreens with mineral-based products, such as zinc oxide, during their visit to the national parks.

What do I need to take on the day trip boat with me?

What do I need to take on the day trip boat with me?

Sunblock, towel, swimwear, in low season it’s a good idea to bring rain wear and a warm jacket. Most things are included in our trip price. Soft drinks and beers are the only items you need to pay for. There is a limited supply and selection on the dive boats so please feel free to bring your own and store it in the icebox onboard.

Are there any dangerous creatures I need to worry about?

Are there any dangerous creatures I need to worry about?

Do I need to know how to swim to scuba dive?

Do I need to know how to swim to scuba dive?

The short answer is no (but it helps). You can do the Discover Scuba Diving – SSI Try Scuba Diving without knowing how to swim. If you would like to become a SSI certified diver then you will need to know how to swim 200m or snorkel 300m!

What sort of food will be on the day trip?

What sort of food will be on the day trip?

Food is a mixture of Thai and Western (more Thai). Our boat can cater for vegetarian or vegan on special request. Please let us know if you have any dietary requirements and we will do our best to provide you with meals to your liking.

According to which standards do you teach divng?

According to which standards do you teach divng?

We teach according to the two largest diving organisations in the world SSI and PADI. But by far the intensity of the pool diving exercises, the length of the training dives, the good training level of our instructors and the small teaching groups are far beyond those standards.

How many student divers are in a scuba diving class?

How many student divers are in a scuba diving class?

We teach scuba diving in small groups. A maximum of 4 student divers per Scuba Diving Instructor.

Customers who booked this, also loved